We focus on your dealership. So you can focus on the road ahead.

Get on the road to success with specialized financial solutions for auto dealers.

Raising and managing capital for your dealership provides new opportunities. And you don’t have to do it alone. Our auto dealer team has decades of industry expertise and a thorough knowledge of local and national market matters. Business growth is just around the corner.

Want the inside scoop?

Truist Dealer Insider gives you reliable updates on industry topics that auto dealer leaders like you care most about, including M&A, lending, and views from professionals and other entrepreneurs influencing the future of auto retail. Get timely information that you can trust and use in developing strategies to make your dealerships more valuable. 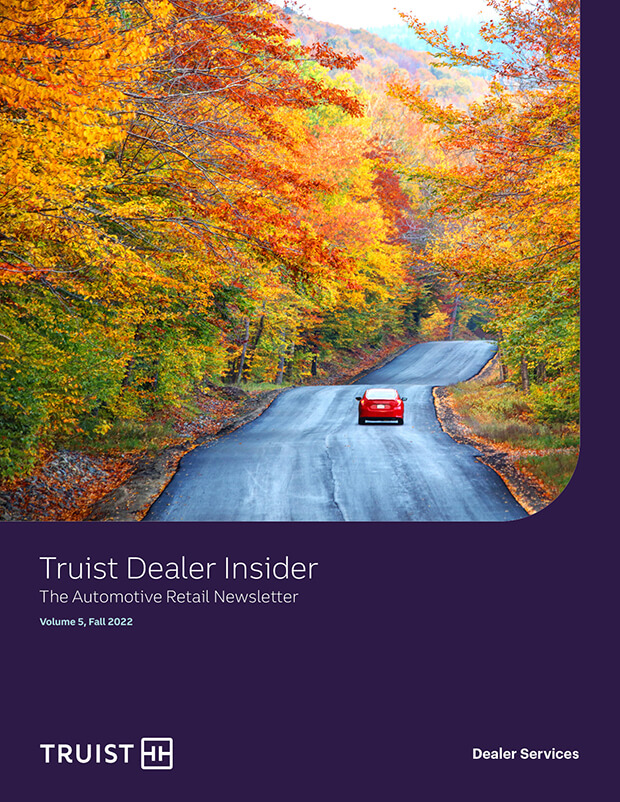 Sign up to receive the Truist Dealer Insider - straight to your inbox.

KC: Good afternoon. In the Driver's Seat today is JT Taylor, Managing Director of Automotive for Truist Securities. During his more than 30-year career in the automotive industry, he's worked in both retail and the manufacturing sides, developing deep relationships throughout the U.S. and Canada. Prior to Truist, JT led the auto retail M&A practice for the Presidio Group. JT welcome! Let's start off with some easy, fluffy stuff. You work in the investment banking side of the business, but Truist is also a commercial bank. I assume you guys are seeing all kinds of economic trends right now across the auto industry. Give us a little perspective on where the market is right now.

Taylor: Well, that's not fluffy at all. As you know, it's kind of an odd and extraordinary market that we're dealing with right now KC and you guys do a great job of covering it at Automotive News. But due to a confluence of a lot of factors, we really believe that dealers may be in the golden age of automotive retail right now. The American consumer: financially healthy. Personal debt is at low levels. They're employed. Banks, they're enjoying the lowest default ratios that they've ever had on their auto portfolios. And we're loading the customers at historically low interest rates. Affordability is good. That may change, but right now it's great.

Manufacturers are coping with incredibly tight supply issues, but they're doing well. They're providing excellent vehicles, nicer vehicles than we've ever had before. And consumers want to own them due to their production, though not meeting the demand. Dealers are able to sell new vehicles at margins that approximate SRP. Good news. Used vehicle values are elevated because of that short supply as well, and that improves trade allowances. Retail margins on used cars that are being sold are higher because people are opting for used cars when there aren't new cars available and those consumers that are still on the sidelines deciding maybe to buy their lease out or to just wait for something that they think is attractive, maybe even an E.V. Those folks are keeping their cars longer, maintaining them and repairing them at record levels at the dealership. Again, it's a great time to be a car dealer now. KC, there's some economic factors that are going to affect the current utopia. No question.

The biggest things are the certitude of rising interest rates. The Feds are going to want to do what they can to push down inflation rates, understandable and welcome. But those rising interest rates are going to beat the demand due to affordability issues. Let's put some math to it. Average new car loan today is $38,000. Every tenth of a percent increase in interest rates on a 60-month loan, that goes up about $3, so a tenth of a percent on a 16-month loan, $3. Typical paying point for a monthly payment for a consumer is that $50 to $60 range. So, there's a payment elasticity of about two percent on an average car loan today. That means when the average interest rate on a 60-month car loan goes to 6.25 or better, we may see some slowing in demand. Maybe the reality is that the supply demand ratio is upside down by seven million units already since the start of the pandemic, and it'll take years to meet the pent-up demand that is being established by that inaccurate production rate that we have to meet demand.

KC: You touched on a ton of trends there JT, but one that I want to talk about for a minute is we've seen dealers and their partners get so much smarter about data and technology really over the last two years. The ones that were tip toeing now have to really jump in. They're bringing on new vendors, boosting profitability, enabling digital retailing. But the tech is really expensive, especially if you're a single point or just a couple of points. How do you guys see all this playing out over the long term?

Taylor: Well, it's a very astute observation and another subject that you guys are covering well at Automotive News. But the reality is if I'm going to be relevant in the future as an automobile retailer in the United States, I have to make some of these investments because my bigger competitors are making these investments in these tools that are finally bringing some operational efficiencies that enhance profitability. We're kind of at a tipping point. For decades, dealers spent a lot of money on tech that they didn't know if they needed it or wanted. And some things happened. And now they're seeing some things that are very, very encouraging to make those investments. You're right, the smaller dealer platforms, it costs just as much to buy these tools as it does for the larger platforms, and they don't have as many dealerships to spread that cost over. But thankfully, profits are extraordinary right now for dealers. They're in a financial position, most of them to make these tech investments because you don't patch the roof when it's raining, you don't have the money, you're not going to make those improvements.

KC: I think 2021 was probably a record year for dealer acquisitions. Buy-sell market is just on fire. We can't write enough about it. What do you see going on here and what does it mean for the position of the traditional dealer in our economy? The role they play, the family-owned private business that's a big part of the community.

Taylor: From a macro view, 2022 was always going to be a high-volume year for acquisitions. And there's one major league reason that is out there and that's going to be big. And it's because baby boomer’s own car dealerships and boomers are getting old. Desire to retire is still the driver behind the sale of the highest percentage of private businesses. As you've pointed out, there are a few other reasons also driving today's M&A tsunami and it is a tsunami. From 2013 to 2020, the average number of franchises that have changed hands in the United States was about 500. In 2021, that number went to 700. We anticipate in 2022 it is going to be a life-sized number of transactions. It may not be fueled by the Asburys', with 91 franchises being added to their platform, but the midsize and smaller groups are definitely going to keep that momentum going. Why is that happening? Because smaller dealers, as you pointed out, aren't in a position to efficiently afford these tech investments that are going to be required to be relevant in the future. That's a big reason. Shareholder conflict, particularly in the second or third generation, these are mature businesses. A lot of families have owned them for even more generations, four or five generations and sometimes shareholder families have divergent goals in the individuals, and it's better to monetize or shrink the platform a little bit in order to have peace amongst the shareholders. What about debt? Oh, my goodness. Banks, including Truist love car dealers.

Banks have these huge deposit bases. They need to put money to work. Interest rates are still low. Dealers, for the most part, are rather conservative borrowers. There are great clients, so you will see lenders fueling acquisitions as well. Available capital. Frankly, it just sounds like a Dickens novel, but it is the best of times, and it is the best of times. Buy or sell. I have never seen this balance between value to sellers. I get the most from my deal and opportunity for returns for buyers because of this very rosy horizon in the business from a profitability standpoint, for the next few years. Great time to sell. Now, as you can hear, Truist is kind of all in on the American car dealer. Let's talk about that community-based business. We believe that most dealerships are going to continue to be family owned, community centric, because retail, by its nature, is community centric. Without question, there will be fewer families owning the same number of stores. The American car dealer? Well, we believe that they're the fabric of our entrepreneurial culture, and they're going to continue to draw the best businesspeople into what we consider to be the best industry. The future is tough, but we think it's really bright.

KC: JT couldn't agree with you more and really appreciate your points today, thanks for being with us. I'm sure you've seen our little 0-60 challenge we like to give people, you know, just a little sense of who you are. You up for it?

KC: So, first job you ever had?

Taylor: Well, out of college, I worked as the consumer relations manager at the Hess & Eisenhardt Armoring Company. They provided personal security upfitment for personal vehicles, including the presidential limousine. Interesting client base, to say the least.

KC: Very cool. So, if you could drive any car, would it be one of those armored cars?

Taylor: I don't need it, even though I do live down here near Miami.

Taylor: Well, I've got a soon to be built 2022 Cadillac CT5 V Blackwing that I ordered from my friends at Al Cerra Cadillac in Grand Blanc. Thank you, Joe Cerra, and I'm looking forward to getting behind the wheel.

KC: A nice plug there for Joe.

Taylor: He needs it.

KC: He needs it. JT, thanks again. And ladies and gentlemen, please join us next time In the Driver's Seat.

In the Driver’s Seat

Dealership acquisitions and the golden age of auto retail

Expand your knowledge with resources for a better business strategy. Stay up to date with trending topics, news, and research. Get in touch with an expert.

We’ve got the expertise to take your business to the next level. Talk with our industry specialists and gain the advantage of our auto dealer capabilities.