Education: The Foundation for a Successful Life With Wealth

Education: the foundation for a successful life with wealth

The effects of wealth are numerous and challenging, and in truth, the challenges may outweigh the benefits. With wealth comes financial security, but without financial literacy, finances can slip away. Providing opportunities for learning is a crucial component to helping families sustain their wealth across generations.

Accumulation of wealth is most commonly measured by financial capital. Very few families have understood that their wealth consists of three forms of capital: human, intellectual and financial. Since our founding, Truist Wealth Center for Family Legacy was built to view wealth as part of a multi- dimensional system with a multi-generational outlook focused on growing all three forms of family capital. As Jay Hughes described in his 1997 landmark book Family Wealth: Keeping it in the Family, the human capital of a family consists of the individuals who make up the family. The intellectual capital is comprised of the knowledge gained through life experiences of each family member, or what each family member knows. The financial capital is the moveable and immovable property it owns. Truist Wealth Center for Family Legacy’s education process focuses exclusively on developing the human and intellectual capital of a family while preparing them to be responsible owners and stewards of the family’s wealth.

We have developed countless learning programs to focus on comprehensively preparing family members for the roles they have now or may assume in the future. Ultimately, the goal of Truist Wealth Center for Family Legacy’s process is to help instill an ownership mentality in the next generation, even when the next generation assets are held in Trust. A lack of understanding and/or appreciation for the efforts behind the wealth often leads to entitled behavior and a disregard of the work/reward equation. Burning through the family’s wealth is hardly unheard of. It is a known fact in the world of managing family wealth that 70 percent of intergenerational wealth transfers fail. We believe education and mentoring can reverse the widely-familiar proverb: Shirtsleeves to shirtsleeves in three generations. This is not just an American proverb. It is a universal phenomenon. In Japan they say, “Rice paddies to rice paddies”; in Italy, “From the stable to the stars and back again” and, in China, “From peasant shoes to peasant shoes in three generations.”

How can this be?

According to research conducted by Roy Williams and Vic Pressier of 3,250 wealthy families, 25 percent failed to successfully transfer wealth because of unprepared heirs. Think about it: to be unprepared to sail a boat, take a test or even cook a meal will most likely end in disaster. Or, at the very least, disillusionment and disappointment, which affects confidence, morale and, perhaps most importantly, motivation. The same outcome can be predicted for an unprepared heir.

Teaching the next generation

Education around wealth spans a lifetime, but it needs to begin early. Developing an education routine that includes mentoring and sharing of information can convert the next generation family members into owners of wealth. Getting them involved in the education process and family decision- making early cements this commitment.

Before educating the next generation, families should be clear on the messages they want to deliver—messages around money, the family history and their shared values.

The way parents think and feel about money can have a tremendous impact on actions related to wealth, and can have an equally large impact on the next generation’s feelings and attitudes towards money. Your relationship with money can be attributed to the way you were raised with money. What were the money messages you heard growing up? What were your experiences with money? How did the money attitudes of your parents differ? Exploring the answers to these and other questions can uncover your relationship with money, how it developed and the messages you might be passing on.

Do your children know their family history? Do they know who was working in “shirtsleeves” to create the wealth? Sharing the history and the meaning of the money helps clarify how the family culture has developed and how the values originated.

Life presents many teachable moments. Any discussion that holds the question, “What’s more important - this, or that?” is an opportunity to talk about values and teach the importance of values as a determining factor. Being purposeful around values and being a good role model establishes a roadmap to guide the next generation through their choices in life. Sharing family values is foundational to imparting an ownership mentality.

The path to an ownership mentality means instilling responsibility and deterring entitlement. Learning to set expectations and boundaries and developing the discipline to hold firm to them goes a long way toward avoiding bail-outs, and helps to build self-sufficient behavior. Again, being a consistent, responsible adult teaches the next generation the same. Learn the difference between creating opportunity and enabling. Children who learn from mistakes made when the stakes are low will learn about consequences and outcome – a skill they carry as they grow.

Financial education is not being taught in our children’s schools. They learn from what they see. You put a card in an ATM and money comes out. Swipe a phone – or even your watch – and purchases are made. It all looks pretty simple and rewarding to young eyes.

Financial education is a necessity for everyone, but this need is amplified when you add wealth to the equation. The next generation should build confidence around handling money now, when things aren’t as complicated. In the future, when their finances are much more complex, they will have the fundamental knowledge and confidence to ask the right questions of their advisors in order to make informed decisions.

We find it essential to learn to communicate with the next generation about the future of the family’s wealth and how it affects their plans. What are your intentions? Do you want them to make it on their own? Do you want to provide incentives? Do you want to support your children so they may follow their passions without financial worry, or allow them to strike out as entrepreneurs knowing there is a “family bank” to support their efforts? Managing the expectations of the next generation in relation to the family wealth and their dreams eliminates surprises, confusion and discord. 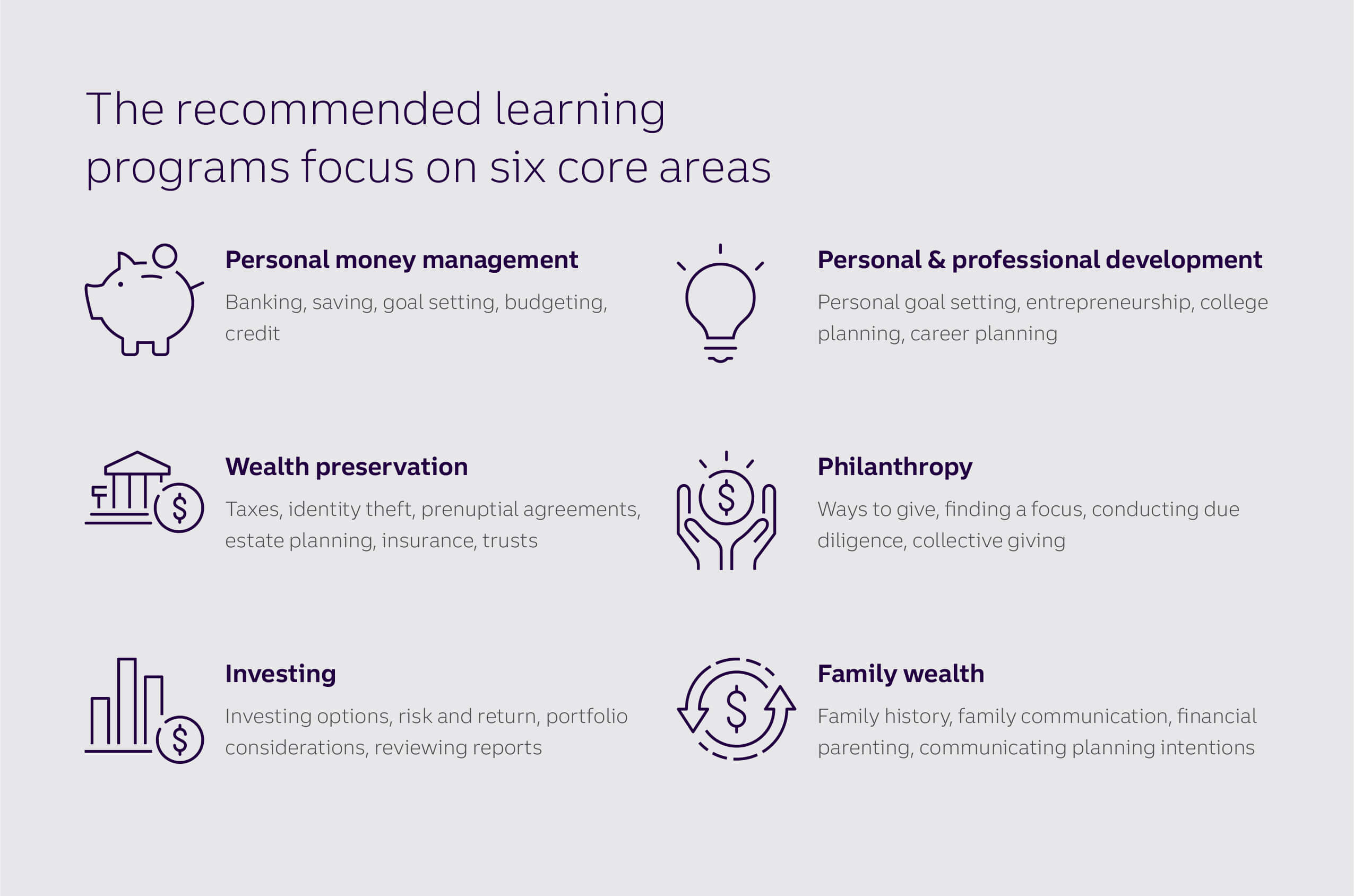 Our approach is twofold: We educate on financial topics that everyone needs to know, regardless of the level of wealth, and we educate on topics that arise because of the presence of wealth. For example, everyone should know how to create a budget. However, not everyone will need to know about the workings of a Trust, but in a life with wealth, this is essential. Also relative to the presence of wealth is the emotional impact of wealth – how wealth impacts relationships.

Our Education Team works with each family to determine their shared family objectives and the personal goals of each member of the family. We determine which programs are most appropriate by using checklists, questionnaires and assessments.

Each of the six core areas have programs, games, and tools that are designed to be fun and interactive and can be delivered in one on one or group settings. The programs are delivered on a consistent and ongoing basis to ensure their effectiveness.

Our programs start between the ages of 5-7 and go well into adulthood. We believe there is always an opportunity to learn. With young children, our programs revolve around the premise that you earn money and then you have choices of what you can do with it – you can save it, spend it, invest it  or give it away – or a combination of all. We play games to illustrate each of these concepts to keep the learning fun  and interactive. As the children enter high school, we begin to look at their own personal finances – their responsibilities, the events that will be taking place in their lives and use these as teachable moments - opportunities for education. For example, if a child will be purchasing a new car, this is a perfect opportunity to discuss budgeting, credit and insurance. If they are starting a new job, it’s an opportunity to learn about paychecks and taxes. We strive to make  them confident with their finances as they grow and collect responsibilities.

Much of our education involves coaching of parents. We develop and host programs to teach the next generation about the technical aspects of finances, but most of the learning is done outside of meetings, between children and their parents. Kids are constantly watching their parents and how they handle money and most teachable moments occur during everyday life. We coach parents to not only watch for these moments but to be prepared to take advantage of them.

Living a life with wealth presents some unique challenges and therefore, in addition to individual and family learning, Truist Wealth Center for Family Legacy holds annual learning events for our community of client families. At these events, family members have an opportunity to learn about a variety of topics from well-known experts and case study experiences in addition to the opportunity to learn from the experiences of other families, their peers.

The key to the success of these programs is consistent and ongoing learning. If you only exercised one week per year, would you really expect to be in great shape? The same goes for education around wealth. It is a long-term process that requires commitment from all involved.

The overall goal of the education process is to help develop the human and intellectual capital of a family while preparing them to be responsible owners and stewards of the family’s wealth. Our experience has taught us that with clear goals, high engagement from the family, and consistency, this can be accomplished!

Talk to a Truist Wealth advisor or reach out to Truist Wealth’s Center for Family Legacy for more information.

Request Accessible PDF
Download PDF on Education: the foundation for a successful life with wealth

An accessible PDF allows users of adaptive technology to navigate and access PDF content. All fields are required unless otherwise noted.