According to International Institute of Finance (IIF) estimates, the global debt level increased by $24T last year, bringing the total closer to $300T, and moving countries a couple notches up on the debt-to-GDP ladder (Slide 3).

Record low interest rates, including negative rates in most of Europe and Japan, made debt servicing easier. Even though the world’s total debt recorded in the Bloomberg Global Aggregate Index grew six fold since 2000, the servicing cost of that debt stayed flat over the years (Slide 5).

The tide has changed

Now we’re hopefully nearer to the end of the Covid-19 crisis than the beginning; normalization of rates could strain public finances.

It has already started in many emerging markets economies where inflation worries led to many policy rate hikes in 2021 (Slide 4). According to IIF estimates, each 1% change in average yields increases debt servicing cost by 2% of GDP in the U.S., complicating monetary policy decisions.

Now is the time for the denominator to work

Debt-to-GDP ratios in many countries have ballooned above 100%, including in the U.S. In 2021, the world economy is expected to grow a record 5.9%. Higher growth rates and inflation running higher than the servicing costs will eventually reverse the trend for debt-to-GDP ratios.

How much debt is too much?

If Japan, with a 256% estimated debt ratio, is the ultimate final destination for the developed economies, many countries have more room to rise. Not every country is in as fortunate position as Japan, which issues debt in its own currency (yen) and where more than half is owned by its central bank. 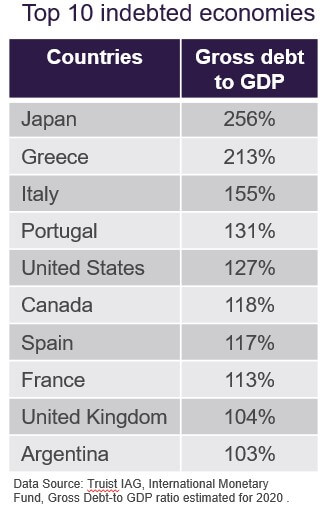 With debt levels reaching above GDP in many countries, debt sustainability becomes a fundamental question. When analyzing sovereign debt structures, debt servicing is more important than the actual debt levels in many cases. Japan, the country with the highest debt levels in terms of GDP, has been servicing its debt at almost no cost, thanks to low interest rates enabled by the Bank of Japan. Even with the recent increases in fiscal spending, Germany borrows at negative interest rates, thanks to the European Central Bank’s (ECB) ultra-loose monetary policy, which keeps the deposit rate at a negative half a percent. If the cost of borrowing is zero or negative, what is the amount a country can borrow? In theory, the answer should be “an infinite amount” as the cost of borrowing (servicing the debt) is negligible. Still, unfortunately, history is filled with international debt and banking crises or high inflation periods that result in currency crashes or debasements. Therefore, countries with arms-length control of the monetary authority and no external debt other than their currency will have an advantage going forward.

In emerging markets, there are numerous countries with debt issued in currencies other than their own – such as in the U.S. dollar or euro. Argentina, Turkey, Brazil, South Africa, and Mexico are prime examples. Since these countries do not control the foreign currency, they’re at a high risk of default if their local currencies decline in value. Therefore, inflation becomes a critical issue, and foreign currency fluctuations are keys to the debasement of the currency.

In the Eurozone, no one country has full control over the decision-making of the monetary authority.

This feature improves the independence of the ECB; however, while this gives credibility in good times, it creates a bottleneck in bad times. During the European debt crisis of 2010-2013, with Greece at the epicenter, the common currency’s future came into question with the ECB’s hands tied by different factions within the organization. With relatively high amounts of debt, Greece, Italy, Portugal, Spain, and France are at the mercy of ECB’s ultra-loose monetary policy, over which they have little to no control.

U.S. debt still manageable, debt ceiling could be an issue

During the pandemic, an unprecedented amount of fiscal stimulus was deployed, nearly 25% of GDP, pushing up the U.S.’s debt-to-GDP ratio. The Fed absorbed most of the additional deficit spending debt, increasing the size of its balance sheet. The U.S. only issues debt in U.S. dollars, and the federal government is the issuer of the U.S. dollar. In theory, assuming there is no debt ceiling, the government can issue new debt to pay old debt forever. There is one side effect of this theory—inflation. That is what happened in 2021, with inflation expected to reach its highest levels in three decades.

To read the publication in its entirety, including our comprehensive view on what this means for global investors and consumers, please select the "Download PDF" button, below.

An accessible PDF allows users of adaptive technology to navigate and access PDF content. All fields are required unless otherwise noted.